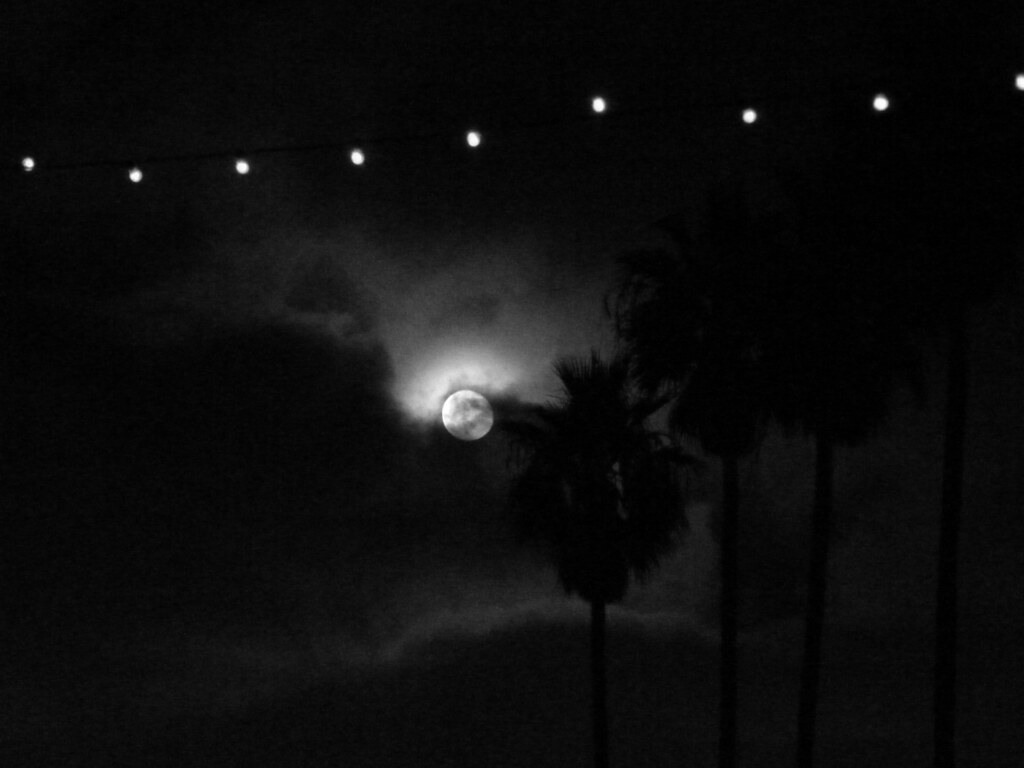 On learning that this week’s photo challenge is “eerie,” I started thinking of all the photos in my library that might fit. My mind immediately went to this one, a shot of a nearly-full moon behind ragged clouds taken, appropriately enough, on Halloween last year.

Just about all of my “eerie” shots involve the moon, or clouds/fog, or both. For instance, this view of fog pouring over a hillside at sunset, and the shadows of the trees inside it.

Or this one, a this scanned photo of a lunar eclipse from 1994. I’m fairly certain that the bright splotch is the moon, and the rest, including the ring and the sharper image at upper right, are lens artifacts. It’s been so long that I don’t remember any specifics of taking the photo. 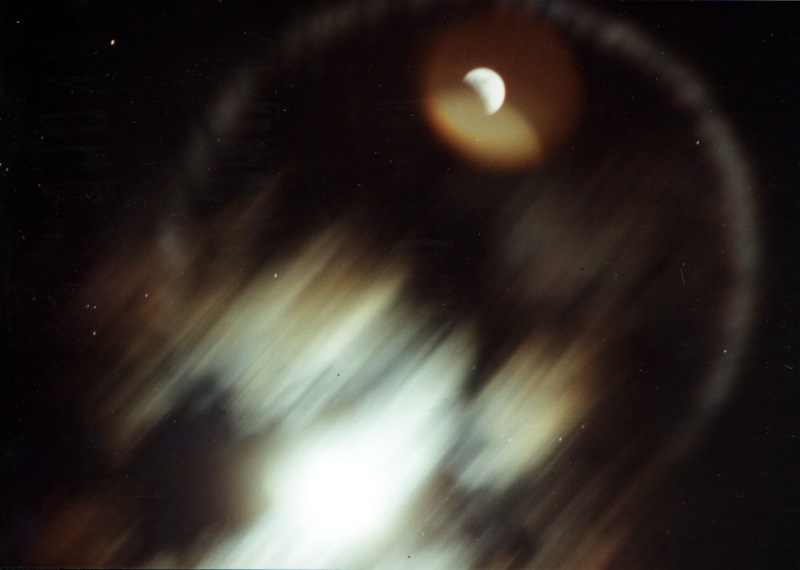 Finally I remembered a series of photos I took at the Thurston Lava Tube in Hawaii, trying to use natural light (with only the cave walls to brace the camera) and picking up ghost images of the other tourists wandering through.

I have some more shots of that cave over at K-Squared Ramblings. That’s also the blog where I’m trying to do NaBloPoMo this month. I started yesterday with a post about yesterday’s shooting at LAX and the spillover it had on the parts of town near the airport: roads closed, constant helicopter noise, sirens, and thousands of stranded travelers leaving the airport on foot, trudging over a mile dragging their luggage in a ragged line. You know, if I’d thought about it and found the right position for a photo, that would have made for a good “eerie” image. 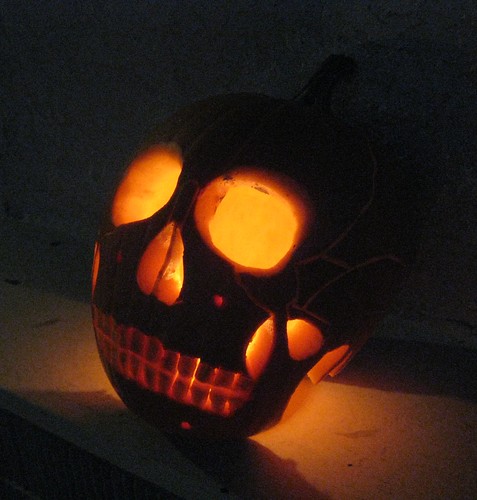 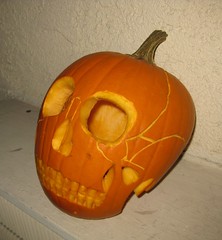 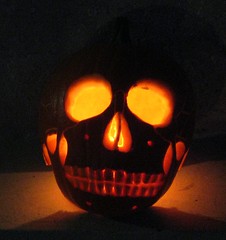 I used a pumpkin that was pretty much already shaped like a skull, and drew on it with a wet watercolor pencil following illustrations I found online. For tools, I had a $.99 “5-in-1″ saw thingy, a plain sharp kitchen knife, a two-pronged olive pick, and an X-Acto. I opened the pumpkin from the bottom, leaving the mastoid/styloid area temporarily uncarved, and discarded the chunk I took off. After cleaning the pumpkin, I carved the spaces between the teeth first with the 5-in-1, leaving the top and bottom rows connected in the middle, then used the kitchen knife and the X-Acto to shape the tooth sockets and remove the…well, skin of the teeth. Once they were skinned, I sliced out some space between them and shaped the tooth surfaces. Warning: the teeth are fragile after skinning, so you should use the finest/sharpest cutting tool you have for shaping them. The X-Acto worked great, but I’d have loved to have been able to find my Pumpkin Masters fine saw. *grumble*

The nasal opening was done by sawing the central vertical lines first, then the rest of each hole. I skinned the septum with the X-Acto…carefully. The orbits and the spaces around the mandible/maxilla were very easy. I enlarged the inside parts of the orbits, flaring the holes inward to look more hollow, and did some X-Acto shaving on the outside for a more sculpted look.

The cranial sutures were mostly made possible by tool #4 of the 5-in-1: a little outcropping on the handle that strips off a neat line of pumpkin skin. It took too much pressure to use on the parts near holes, though, so I had to angle the X-Acto for things like the jaw hinge area. The foramina were made by twirling the olive pick like a drill, and then cleaning up the outside of the holes.

When all the lines were done, I carved the mastoid and styloid processes and cleaned up the lines of the mandible. I rinsed the whole thing under running water to get rid of “sawdust” and scrubbed off the pencil marks. We displayed it by setting it on the AC unit and leaning it against the wall, with a candle underneath. It was a lot simpler than my original plan of hanging it from a plant hook with an LED tealight somehow secured to the occipital bone. It seems to have worked as a “yes, we’re handing out candy” signal. Last year we didn’t get any trick-or-treaters. (We also didn’t put up any decorations that year, either.) This year, they started arriving while I was taking photos of the pumpkin…and while Katie was opening the bags of candy!

She dressed up in her vampire costume, which got some great responses. One trick-or-treater asked about the fangs. She overheard another walking away from the door and wondering, “Do you think she was a real vampire?”

By 8:50 we were down to only three Starbursts left to hand out, so we brought the pumpkin inside and called it a night.

Earlier in the afternoon, I ran some errands and deliberately went to the Spectrum so that I’d have a chance of spotting the Great Park Balloon in the air while it still had the Jack-O-Lantern face on. I thought this view made for a nice image of the Great Pumpkin, rising up over the trees. 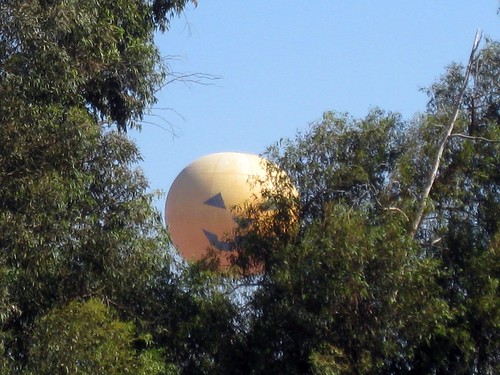 The Great Park Balloon in Irvine, California, all dressed up as a Jack-o-Lantern for Halloween. I was hoping to get a shot of it aloft, but it landed as I approached the park.

It looks really eerie lit up at night, floating off in the distance. Or just floating above office buildings.