Los Angeles has a weird relationship with water. Most years there isn’t enough rain to support the region’s population, agriculture and industry without importing it from surrounding areas. Some years there really isn’t enough. And some years there’s so much rain that floods are a greater threat than drought.

The region’s flood control system is built around that threat, channeling storm water out to sea as quickly as possible. In many places, rivers are lined with concrete, typically with a narrow channel in the middle to keep it flowing during dry spells and a wider channel to prevent flooding. This stretch of the Los Angeles River in Studio City is a good example:

Other parts of the river are much nicer, even navigable at times, but this stretch really is just a concrete drainage ditch inside a bigger drainage ditch.

Unfortunately what’s needed in flood years ends up hurting us in drought years, sending too much of the rain we do get into the ocean instead of collecting it. In recent years they’ve been testing systems to recharge groundwater reserves, but if drought becomes more common — and indications are that it will — we’re going to need to revamp the system.

Back to the photo: This was taken last weekend at the Los Angeles Walk for Food Allergy. This year’s event took us around the CBS Studios lot past soundstages, streets made to look like different parts of the US, production buildings, prop/set storage, and yes, the river.

Food allergies can range from mild to life-threatening — yes, people die — and those of us on the far end of the range need to be constantly on the watch for hidden ingredients and cross-contact between foods we can eat and foods we can’t. FARE funds studies to explore the causes of food allergy and develop new therapies. They run outreach programs to make it safer to visit restaurants, or just be at school or the workplace.

Donations are still open if you would like to contribute. There are 15 million people living with food allergies in the US alone, and your contribution can help all of us.

There’s a sunken courtyard near the office where I work. It’s shaded on three sides by an office building, a hotel, and a parking structure. Trees soften the sunlight that does make it through. Three steps lead down from the edge to the brick floor, with a smattering of concrete benches and planters.

One day last winter, a rainstorm flooded the courtyard. Not very deep, maybe an inch or so (if that). Just enough to turn the bricks into a mirror, which really struck me as bizarre.

A few years back I saw a Tennessee Williams parody at the second stage of the Hayworth Theater in Los Angeles. It was a few rooms opened up and converted in the office section of a historic building, complete with the old-style lighting, molding, wooden floors and carpet that you see here. The “lobby” was the entry level for the back stairway, where they’d somehow managed to cram in a bar and a couple of tables. Then you’d walk up the stairs, around a corner, and down this long narrow hallway until you reached the right door.

The building dates to the 1920s, when offices had character and weren’t just boxes. The theater seems to be gone now, as it’s since been turned back into offices. Because apparently that’s something Los Angeles doesn’t have enough of?

Have you ever seen a ring around the sun? Or a pair of bright spots flanking it? Or a rainbow-colored cloud? Just as sunlight reflecting and refracting inside raindrops can create a rainbow, sunlight reflecting off of ice crystals can form fascinating and beautiful halos. It doesn’t even have to be cold at ground level: if the ice crystals are high up in the atmosphere, spread in a thin layer of cirrus cloud, you can still see them… even in places known for warm weather like Los Angeles. I have a whole gallery of halo photos I’ve taken in southern California. You’ll see them more often than you expect. You just have to look up.

Last September I visited Boston to attend a friend’s wedding. While there I took a guided walking tour of the Freedom Trail, and also wandered the city a bit on my own. I stumbled on this statue with a pair of unconventional partners: Edgar Allen Poe and a raven.

I particularly like how they’ve balanced it so that the raven appears to be flying out of the briefcase as the writer’s papers burst out. My photo album on Flickr has another angle of this statue, plus another 15-odd sightseeing shots.

Behind this gate, a path leads up a narrow access way to a railroad bridge.  Clearly people do get in there from time to time based on the trash – or maybe they just throw it over the fence from the sidewalk. Once I saw two people up on the bridge doing a photo shoot. They probably didn’t get there through here — a block south, there’s an at-grade crossing without any gates, and anyone could easily walk along next to the tracks as long as they keep alert for trains.

It got me thinking about how some boundaries are there to block access, and some are there purely for organizational purposes — consider the property line between two neighbors, defining responsibility for upkeep on each side — and while some of the obstacles we put up are intended to keep people out, sometimes they’re only meant to slow people down or send them down another path.

And then there are the boundaries like the tracks themselves: Structures that aren’t intended to separate regions, but nonetheless just by existing define a near and a far side. Railroads, highways, even natural features like rivers and mountains split communities, climate zones, ecosystems, and nations.

But people are also good at getting past obstacles. We build bridges and tunnels. We find places to ford streams. We find mountain passes, and blast them out to make them easier to cross.

And sometimes? We just go around.

On Friday afternoons I like to take a walk around the area when on break from work. This week I went looking for grids. I noticed very quickly that grids are everywhere in a modern city.

Window grids on glass-faced buildings. Paving and floor tiles. Wall tiles in the bathroom. Ceiling tiles in the office or retail stores. Storm drain grates. The patterns of bumps on the non-slip section of a wheelchair ramp.  If you zoom out, there’s the pattern of streets, all the electrical and data cables making their way around town…

…and of course the metaphorical grid that all of us are plugged into, that some of us long to get off of. 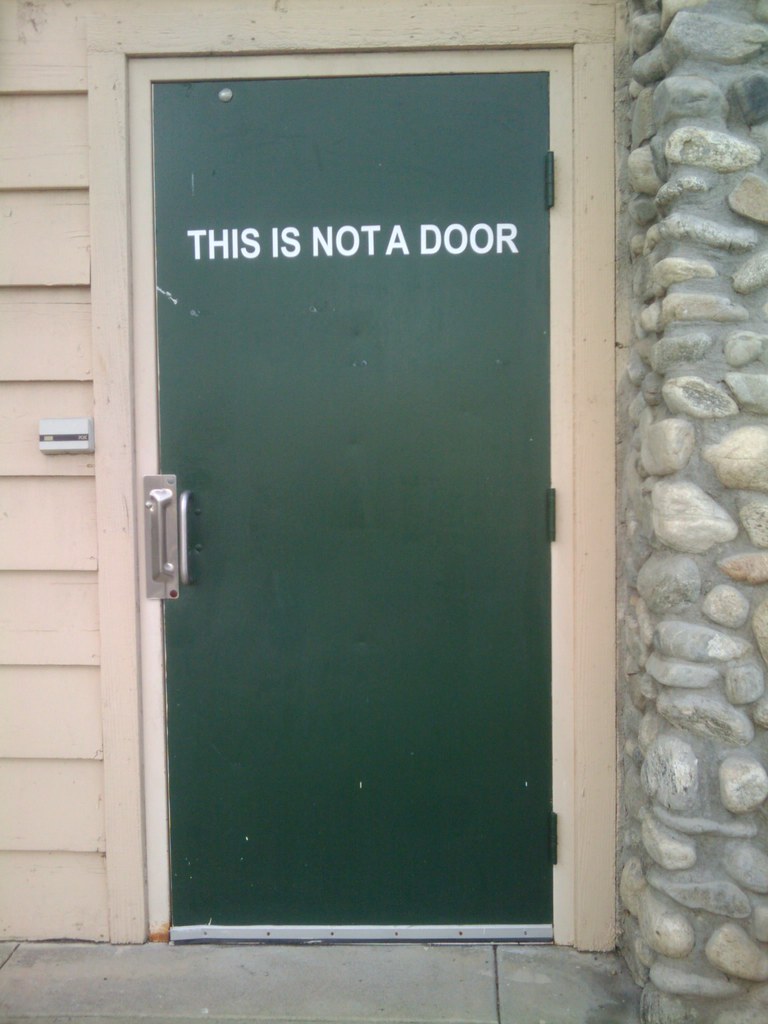 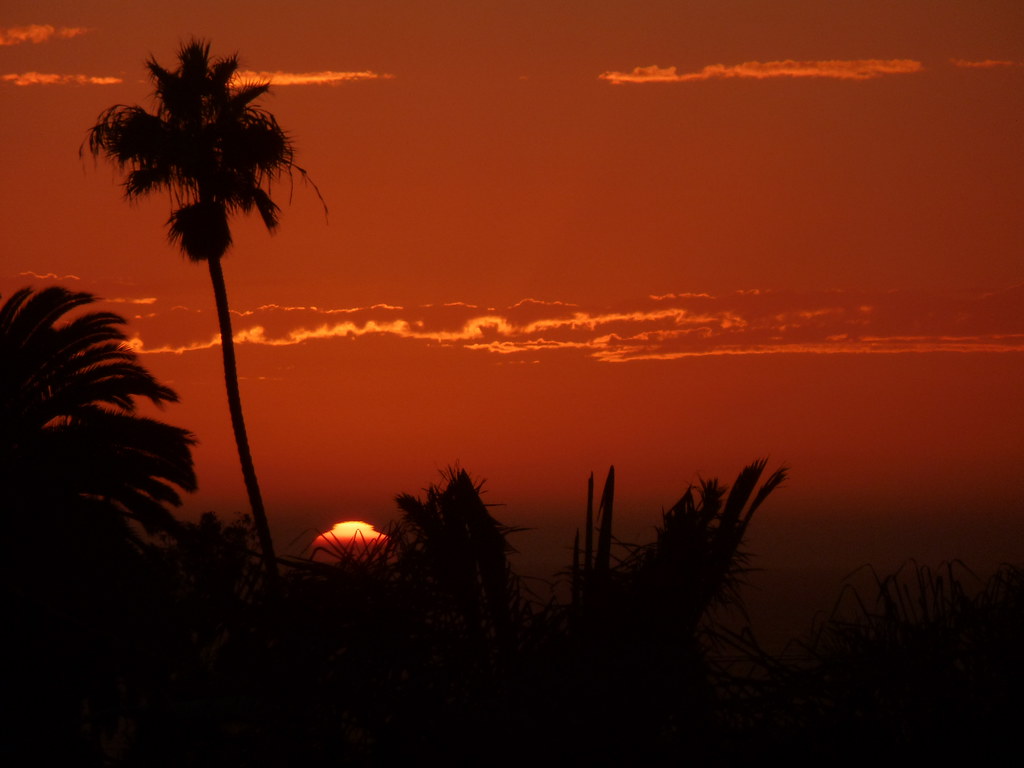 When I have time to compose a scenic photo, the rule of thirds is usually on my mind. Even if I’m not putting an object off-center, I’m trying to line up visual borders with the 3×3 grid — a horizon, or the top or side of a building, or a treeline. Sometimes symmetry works better, though…and sometimes I’m just trying to get a snapshot of someone or something.

In this case, I stopped by a store after work and arrived just as the sun was about to set, at the top of a hill, giving me a clear view to the west. When that happens, you don’t go inside, you stop and watch!

(What I really wanted was to catch a nearby farm-style windmill silhouetted against the sun, but unfortunately the best place for that was in the middle of a crosswalk across a busy street, and I wasn’t going to trust in my ability to stop, aim, take a few photos, and get back to the side.)